A few years ago I was watching a Friends episode where Chandler shows off his laptop. A few scenes later he proposes to Joey and Ross to play DOOM. I didn't know which laptop it was but I knew I had to have it and to see if DOOM would actually run on it. So after some searching I found out that the laptop Chandler is using is the Compaq Contura 4/25cx, the high-end version from the Contura line-up with an active matrix screen.

The First Compaq laptop of this collection

Searching eBay and other auctioning websites I finally found one (in bad shape) located in Italy. It still worked but the keyboard didn't. A few months later I found a German one. That one was in great condition but the floppydrive was broken. So I used the one in the Italian Contura. Now I only had to find a good HDD, additional memory and a US-layout keyboard.

Again, a few month passed when I found a Contura 4/20 close by. The seller was an old Compaq technician, Dave. He's working on his own collection but that is not limited to one brand. Soon he will have his own museum once Corona has passed and I'll post a blog about it. Dave could not only help me with the keyboard but with the HDD as well. Around that time I also bought a 16mb memory expansion from eBay.

So in the end I had a Contura with the same specs or better than the one Chandler says he has: 650MB HDD and 20MB of memory.

But does it run DOOM?

Well, yes and no. It does run it but not very well. After I posted my results on Reddit and the fandom page of Friends, it got quite some fun feedback. After this I found that I missed working on old laptops and so the collection started. Instead of just collecting old laptops at random, I wanted to make sure I could limit my hobby and so it came to be that I only collect Compaq laptops.... because of a Friends episode. 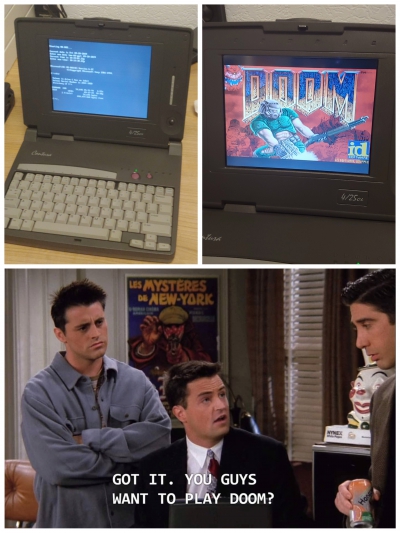 Now, I'm trying to collect at least one working laptop or luggable from each series. Of every model I want to offer some background information, pictures, videos and more. I already had contact with a former Compaq employee from Texas. Steve Leach has provided me with some cool stories and I'm certain more will follow.

At the moment the website is still a work in progress, soon every laptop will be photographed professionaly and then I'll add information.